Meet the Veterinarians & Team of Northwest Veterinary Hospital in Delta! We’re pleased to provide exceptional vet care for your pets! Please call us at (419) 822-5030 to speak to one of our caring veterinary staff members! 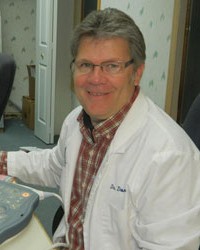 Dr. Fogle holds Bachelors and Masters Degrees in Animal Science (OSU ’76, ’80). He was a member of the 1975 OSU General Livestock Judging Team. Dr. Fogle works with both large and small animals and has a special interest in diagnostic ultrasound and ultrasound guided biopsy. Dr. Fogle and his wife Margie have resided in the Fulton County countryside for the past 28 years. They have three children, Justin (Jennifer), Jodi (Miguel) and Jenny; 5 grandchildren, Ellie, Sam, Archer and Charlotte. 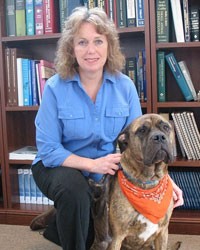 Dr. Bishop loves coming to work, caring for dogs, cats, llamas, alpacas and a few pocket pets. There was nothing else she ever wanted to do for a career. Dr. Bishop fell in love with animals in kindergarten, raising cats, dogs, mice and a few wild orphans. She started working at a veterinary hospital in Columbus, OH when she was 15 years old, and was grandfathered in as a Veterinary Technician. Dr. Bishop graduated from The Ohio State University College of Veterinary Medicine in 1982 and sort of “married into” partnership at Northwest Veterinary Hospital.

Dr. Bishop has 2 sons, Brandon who is a DVM, Teaching at The University of Findley and Brady who is a Turf Technician at Pinehurst Golf Course in Pinehurst NC. She was blessed with great kids. They have shown llamas and alpacas since they were 8 years old.

Dr. Bishop’s spare time is spent raising over 30 llamas and alpacas, 2 dogs, 5 cats and 2 fuzzy bunnies. She harvests and uses the camelid fiber for spinning, felting, weaving and crocheting. She is an ALSA and ILR Fiber judge and ALSA halter judge. 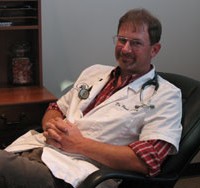 Dr. French is the newest doctor in the practice having been here since 1998. His duties at Northwest Veterinary Hospital include primarily large and food animal, but is also involved in small animal activities.

Dr. French grew up on a small family farm in south east Ohio with a younger brother. In first grade he had to write a short paragraph about what he wanted to do when he grew up. He wrote that he wanted to be a veterinarian and help animals. Dr. French showed numerous animals in 4H growing up. As a small boy he started to treat sick or injured wild animals and did his first surgery at the age of 10, helping the local veterinary repair an umbilical hernia on a pig. After that he really became interested in veterinary medicine. Dr. French attended undergraduate college at The Ohio State University and got a degree in Dairy Science. He then managed a large registered Angus beef herd that was one of the first practicing rotational grazing herd. During veterinary school at OSU he also worked in an influenza research laboratory. He studied influenza in horses and chickens and has had several published articles, helped to develop a new equine influenza vaccine and a rapid diagnostic test for influenza in horses and birds.

Dr. French moved to the area after graduating veterinary school. He has two children that attend Wauseon Schools. They are both active in 4H and have an interest in agriculture. His daughter has shown a gift for veterinary medicine.

Dr. French currently has many pets, most of which were abandoned or unwanted. He has several cats, a dog, goat, chickens, turkeys and a horse. The Boer goat, Sundae, was born with incomplete rear limbs. He could not euthanize her as a baby and gave her a good life for 10 years.

Dr. French enjoys different things within his professional life. His day may go from doing a herd check on a group of cows, then looking at a goat or deer, then back to the office to examine a dog or do a behavioral consult on a cat. Small animal medicine is also intriguing as Dr. French has a special interest in animal behavior.

In his personal life, Dr. French loves to be outside; hunting, fishing, gardening, watching the sun set and spending time with his kids.

Anne has always had a love for animals which is why she chose to become a veterinary technician. She has worked for Oregon Animal Hospital, Countryside Animal Clinic and Northwest Veterinary Hospital. Anne has been with NWVH since 1982 assisting wherever she is needed. It has been her pleasure to be a part of the NWVH team and help care for the client's and patient's needs. During the week, Anne is employed by Wauseon Schools where she is the head cook at the Wauseon Primary School. On the weekends, Anne is at NWVH.

While working at Countryside, she met Jared McClarren. They have been married for 44 years. Together they have raised 3 beautiful daughters(Jenna, Jera and Jessica). They have blessed them with 7 grandchildren who totally captivate their hearts. Anne and her husband live on a farm outside Wauseon. They are actively farming, have raised hogs and continue to raise freezer beef. Anne enjoys helping Jared on their farm, spending time together, being with their grandkiddos, working outside on her flower beds, mowing the yard and playing with Hank, their farm dog!

Anne would like to say, "Thank you for allowing me the privilege to help care for your pet!" 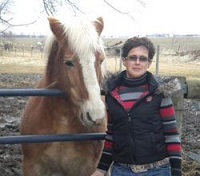 When Missy was in 7th grade Dr. Bay and Dr. Tony Forshey came to her house to repair an umbilical hernia on a colt. That’s when Missy realized she wanted a career in veterinary medicine; here she is 30+ years later! She has been with our practice since 1990.

Missy lives in Lyons with her husband, Brent and son - Mason. Missy enjoys being outside in the garden, tending to her flowers and yard. Her family pets include 2 cats- Gary and Gladys, Abby the dog, draft horses - Sunny and Warren pictured with Missy, and many rabbits used for her son's 4H project. 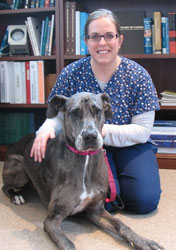 Laura graduated in 2004 from Tomball College, Tomball, TX with an AAS in Veterinary Technology

Laura has always had a love for animals and has always wanted to work in the veterinary field. After moving several times after high school from Ohio to Florida to Texas, she finally settled back in good ‘ol Ohio.

Laura started working at Northwest Veterinary Hospital in August 2006. She lives in Deshler with her husband C.J. and their 3 children- twins: Brystol & Brielle and their little brother Briggs. Laura loves being outside, and spending time with her kids, gardening and going for walks. Her four legged family includes a great dane, Rizzo and 3 barn cats. 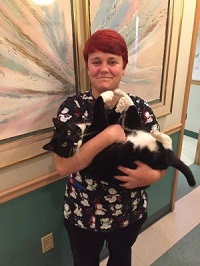 Audri started with us in September of 2016, she graduated from The International Business College of Fort Wayne. Her cats Walter, Cyprus, Baby Princess, Bruce, Ponyo, Castiel, Lucifer, Crowley and Finn all enjoy getting cuddled after work. She enjoys reading, drawing and napping when she can. 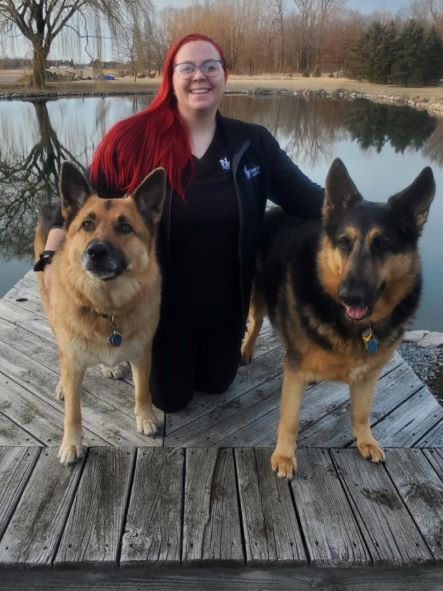 Veronica "Roni" started with NWVH in 2019, she graduated from Stautzenberger College in 2017, but she started in the Veterinary field in 2011. She lives at home with her boyfriend, Matt, of 7 years and her cats Rayne and Bane. In her spare time she enjoys kayaking, crocheting, going to Red Wings and Toledo Walleye hockey games, spending time with her nieces and nephews. She loves cows, riding horses and wrangling pigs at the Hospital.

Krystine graduated from Stautzenberger College in 2021 with an AAS in Veterinary Technology. She started working at NWVH in Sept. 2021 She lives in Wauseon where she has lived her whole life and plans to stay so she can be close to family. Krystine has 2 critter of her own - Harley and Quinn, both DSH cats. She has always had a love for any kind of animal she meets and became a Vet. Tech to help give a voice to those that cannot speak for themselves! 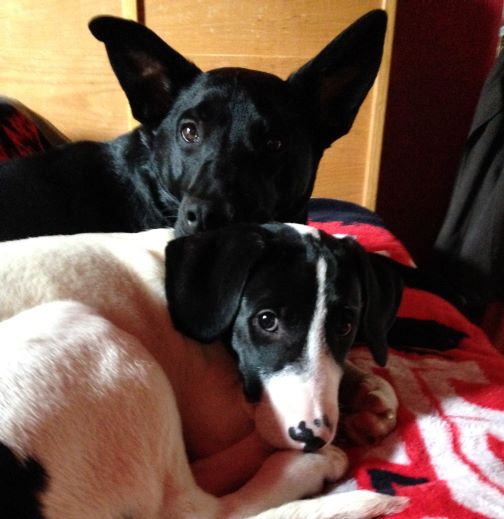 Alisa started at Northwest Veterinary Hospital in July 2007. Alisa and her husband, Casey, have three daughters, and 1 grandson. In her free time, Alisa enjoys being outside, going on walks and spending time with her family. Her pet family includes 2 dogs- Reggie and Stanley, 2 cats- Paul and Thomas. 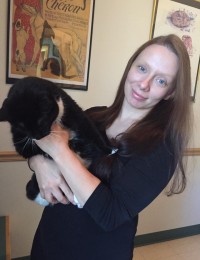 Brandie started with NWVH in June 2019, she lives in Delta with her Family and 4-legged family which also includes 3 dogs- Howie Joe, Shane and Eddie, and 1 cat - Bynx, which she brought home shortly after starting her job here. She has always loved animals and had many types of pets growing up and through the years. Now she feels blessed to work with animals everyday!

Our quality service starts with our pharmacy. Licensed in 50 states, our pharmacy is the most highly accredited partner-pharmacy in the nation. That means we meet the strictest standards for privacy, authentication, and security of prescription orders, as well as follow an established quality assurance program.